"TRELÊCH-AR-BETTWS (TRÉF-LLÊCH A'R BETTWS), a parish, in the higher division of the hundred of ELVET, union and county of CARMARTHEN, SOUTH WALES, 8 miles (N.W. by W.) from Carmarthen; containing 1620 inhabitants. This parish comprises a large tract of arable and pasture, inclosed, and a very extensive district of uncultivated land, consisting chiefly of heath and turbaries, from which latter the inhabitants principally obtain their fuel, and which also afford a supply to the neighbouring parishes. The surface is uneven and in some parts hilly. The petty-sessions for the hundred are held here every month. . . The church, dedicated to St. Teilo, and situated within two miles of the turnpike-road from Carmarthen to Cardigan, was rebuilt in 1834, and is a neat and commodious structure: Capel Bettws is a chapel of ease for it. There are two places of worship for Independents, one for Methodists, and one for Baptists. A school was founded in 1804 . . . it contains about 70 children . . . There are also three day schools, in which about 110 children are educated at their parents' expense; and five Sunday schools, containing about 385 males and females, supported by subscription. . . In the parish is a remarkable barrow, called Crûg-y-Deyrn, or the "King's Barrow,", about sixty paces in circumference at the base . . ."
[From A Topographical Dictionary of Wales (S. Lewis, 1844).] 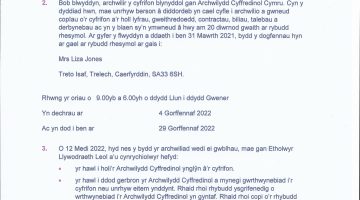